Denver LoDo Rotary Club Increases Its Membership By Over 50% in January! 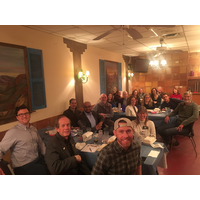 Can you imagine increasing your club membership by 50% in one month? The Denver LoDo, just that this past January. Charlie Hunt is a member of the club and a Return Peace Corps Volunteer (RPCV). As a member of District 5450 Rotary - Peace Corps Alliance committee, he has had a dream for some time to recruit RPCVs into the club. It is a natural fit. The focuses of both Peace Corps (PC) and Rotary are almost identical. Recruiting RPCVs is certainly logical.

Charlie is also very active in RPCVs of Colorado. As a matter of fact, he is the current president of the organization. Because of this connection, he has been able to have conversations with RPCVs about how Rotary can fit in with their professional development and community service. To his pleasant surprise, he found a number of RPCVs who already had connections with Rotary. One of the club's new member was a Rotaractor. One had received a district scholarship while in college. One had received help from a Rotarian with his professional career. One attended RYLA and then became a RYLA counselor.

In the past Charlie had heard from many RPCVs that the difficulty in joining Rotary was typically a financial one. With that in mind, Charlie talked to the leadership in the club about the idea of developing a satellite group under the club. The idea would be that the club would set a different dues structure to allow for more RPCVs to join the club. Club leadership liked the idea.  The new satellite group has a minimal dues structure which makes it very affordable. At the same time, the club is including all of the satellite group members in club committees, service projects, and monthly club socials. Three new members have already been in contact with our district grants chair Carolyn Schrader to volunteer in reviewing international service grant applications. This group is also willing to connect district clubs applying for grants with local RPCVs to assist with refining their projects to have an understanding of local cultural issues where the project will happen.

The club officially inducted ten new satellite group members to the club on March 6th.  DGE Curt Harris and District Membership Chair Lynn Perez-Hewitt were in attendance to celebrate this significant addition to the club's membership.

If you were interested in learning more about the connection between Peace Corps and Rotary, please check the website www.partneringforpeace.org. Also, if you were interested in learning how to leverage the Peace Corps rotary partnership in your district, take a look at the toolbox we put together to help with PowerPoint, handouts and videos to make the job easier.  You'll find a link for it at https://www.partneringforpeace.org/cpages/get-involved.