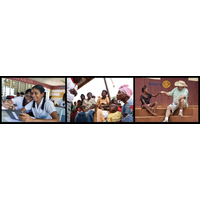 As a naïve young man from Colorado just having graduated from a small university, I joined the Peace Corps with the dual purpose to travel, serve and, if possible, save the world. After four months of language and agricultural training, I landed in one of the most isolated sites in the highlands of Guatemala. Though beset with fear of the unknown and feelings of profound isolation, I became familiar with and appreciated the people of the rural community of Calapte. After several years on assignment, not only was I able to introduce new crop varieties which enhanced local production, but I mobilized the community to reconstruct their 100-year-old school. After a near-death experience took me to another part of the country, I met the love of my life and we established a stable bi-cultural home for our three children during the violent Guatemalan Civil War.

My first real job out of the Peace Corps was with CARE International in Guatemala. I was responsible for designing an agroforestry program to combat the destruction of the environment and increase agricultural production for small farmers working on steep hills. This began my thirteen-year career promoting rural development through various international NGOs.

My career in cross cultural settings promoting community development made Rotary a natural fit. In 1981, I joined one of the downtown Rotary clubs in Bogota, Colombia, where I was a Director for Plan International. I continued with Rotary in the United States and eventually served as president of the Rotary Club of Scottsdale in Arizona (United States). As the District Chair for World Community Service (now known as International Service) for District 5510, I lead groups of Rotarians to Guatemala, Honduras and Bolivia to form lifelong relationships with local Rotarians and develop programs such as a clean water initiative in Cochabamba, Bolivia. Naturally, my wife and I encouraged our children to consider the Rotary Youth Exchange program by hosting several students ourselves. Eventually our children participated and were hosted by different Rotary clubs in Germany and France where we made many friends among the local Rotarians.

My work in global development came to a sudden turn after I was let go as CEO of an international NGO. This unexpected twist led me to focus on my children and six grandchildren, also provided a new opportunity to reflect on what I’d accomplished, where I’d failed, and where the international NGO community had come up short. My memoir Different Latitudes provides an insight to this life I lived, and is a tale of physical and spiritual self-discovery through Latin American, African, European, and Asian topography, cuisine, politics, and history. You can read the book here to learn more about my journey.