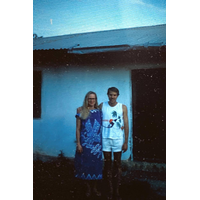 Rotary will forever be linked to my Peace Corps service in Liberia (1984-86). As an educational radio broadcaster and trainer, I worked with the Liberian Rural Communications Network to train broadcast students recruited from various ministries to produce educational programming in sixteen languages, supporting national efforts for agriculture, health, and basic literacy. One of our assignments was to develop programs that would promote an upcoming vaccination campaign.

The World Health Organization, UNICEF, and Rotary International were involved in the 1985 vaccination campaign. Peace Corps Volunteers assisted with logistics and communications in villages for these humanitarian groups and I consider myself privileged to have participated. Fifty percent of Liberian children died before their fifth birthday in 1985. Prior campaigns had failed for different reasons and our challenge was to convince villagers to gather their children and go to clinics on vaccination day. None of us knew we were making history in Rotary’s promise to eradicate polio.

Radio programming featured typical announcements and discussions with prominent officials. However, our best effort went into a serialized radio drama about Flomo, Fatima, and their two children. Week after week, villagers gathered around radios to hear Fatima try to convince Flomo to vaccinate their children. Flomo countered that it took 2-3 days away from the farm and he needed their help. They did not know if the vaccines would be safe, or if a nurse would show, or if there would be enough supplies. There were so many doubts. Fatima eventually managed to overcome all obstacles raised by Flomo by collecting the facts.

The student broadcasters loved this project. Liberians are gifted storytellers and enjoy role play. The radio novella was a big hit. We heard stories that whole villages had clustered around the only radio with batteries to follow the discussion between family members, village elders, and health officials who answered questions. Of course, the villagers talked back to the radio, took up one side or the other, and pantomimed the radio actors, which was the goal. The topic needed to be raised and villagers needed to sort out their priorities before vaccination day arrived. We hoped but knew too well how things fall apart in Liberia, so were cautious as well.

The radio drama format allowed villager concerns to be presented and solved in a nonthreatening way. The students had fun throwing in the typical village banter and humor. A problem-solving dialogue allowed all sides and options to be presented.  Field nurses and the health minister were interviewed to reassure villagers that this event would succeed.  For me, the phenomenal results came down to one word – Rotary.

Typically, there were no medicines or supplies at clinics that were rarely staffed because the nurses were rarely paid. It took a big leap of faith for a Liberian in 1985 to believe that a group of foreigners could succeed where no one else had. The last time a campaign had been held, the vaccines were not kept cold, arrived inert and needles were reused in some cases. Inoculated children developed abscesses, infections, and diseases that were supposed to have been prevented, making people more suspicious of vaccinations.

On Vaccination Day, parents stood in long lines with their children in the hot tropical sun. Villagers had walked many miles to get their children to the clinics that were fully staffed and supplied with cold vaccines in the care of Rotarians. Rotarians made the commitment to hike into the jungle with coolers and vaccines to save the lives of village children I loved. It was Rotary’s face on this miracle.  They blew me away with their planning, efficiency, effectiveness, communication, calm within a storm, and absolutely brilliant results. I was in love. I knew then that if I ever joined an organization, it would be Rotary.

I tried, but Rotary would not have me. I learned that only men could be Rotarians and gave it no more thought. It took a Supreme Court case to get women the right to become a Rotarian, but by then I was launched into a very busy career in organization development. I finally invited myself to join a Rotary Club in New Bern, North Carolina, after waiting decades for my lifestyle to catch up with Rotary demands and rules. Up until that time, my schedule and life were far too busy to work around Rotary’s restrictions.

On the whole, I love my Rotary friends. A visit to one club is like visiting another village. Some things are similar and others new. It is a relief to see online formats, virtual clubs, and flexible ways to engage. As a return Peace Corps Volunteer (RPCV), I am action oriented and want to connect with beneficiaries. New club design ideas can cater to special needs like environmental activism, a popular cause for many young people. However, traditional Rotarians seem slow to adopt and use online resources. In my club of about 100 people, only 3 have taken an online class. I would support a Rotary wide effort to upgrade our member skills in computer use.

I joined the Peace Corps a second time as a counterpart in developing knowledge management systems when I became a RSVP to a U.N. supported agency in St. Lucia. I moved to a small fishing village when the project ended and was a charter member of the Gros Islet satellite club in Vieux Fort. We remain friends and are often in touch. This is a club of really YOUNG people who had been Rotaractors, and there was such a difference from the traditional New Bern club.

My Lucian club was engaged with the local community to discover the best ways to serve. They were visible in the community doing a variety of projects. An important part of their Rotary experience was in direct service where they could see the results of their efforts. They felt better connected and more committed to service projects when volunteers worked together for a common benefit.  Camaraderie developed quickly and member participation was high. Action learning was a successful strategy with young Rotarians that I believe could be useful everywhere.